Team One Step is now forming a team for the 2017 Bank of America Chicago Marathon and Chicago Half Marathon!

All levels of fitness and abilities are welcome. Typically, about half of our team consists of first-timers who just want to finish and the other half are seasoned runners who want to improve their time or meet a personal goal. Whatever your personal goal is, we want to get you to it safely and happily. We want you to not only finish the race, but to love your experience!

Whether you are a first-time runner or a seasoned athlete, Team One Step is for you. We have four levels of training to choose from ranging from beginner to advanced. If you need help choosing the level that is best for you, one of our coaches will help you.

In addition, we provide education on topics such as nutrition, injury prevention, and a course review. Our coaches will take care of you every step of the way!  Team One Step meets once per month for a team run at various locations. 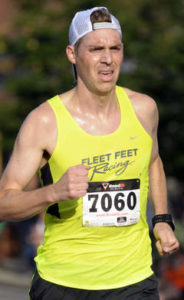 Coach Matt is passionate about helping runners reach their goals while raising funds for an amazing cause. He is looking forward to working with the great people who choose to be part of Team One Step and give kids the opportunity to attend camp! He started with Team One Step as a coach in 2012 and has been a vital member of Team One Step ever since.

Matt has been a competitive runner for over 20 years. He has competed at the junior high, high school, collegiate, and post-collegiate levels, racing at distances ranging from the 400 meters to the marathon. He has also coached at the high school, collegiate, and post-collegiate levels. Matt holds the fourth fastest times in Valparaiso University history for the indoor 5000m, outdoor 5000m, and 3000m steeplechase. He placed 36th overall and 3rd among Illinois finishers at the 2013 Bank of America Chicago Marathon, and has a personal best marathon time of 2:22:44. 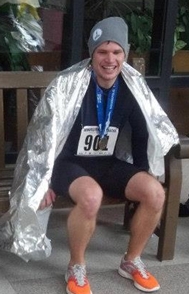 Wes was a couch potato and out of shape until recently. About six years ago, he decided to make running a part of his conscious daily activity and it has changed his life in many ways. He relies on his background to relate to the casual runner and loves helping people discover the same freedom that he has experienced.

For Wes, running is not about setting records and being married to the watch. He runs for the social bonds, the spiritual transformation, and the lifestyle that comes with it. He has run in over five “official” marathons, though he’s been known to run 30 miles from one end of Chicago to the other…just for kicks. Wes has shared his running philosophy with athletes from beginner to advanced, coaching them through 5Ks, marathons and championship triathlons.

Wes loves most things related to running, but he HATES injuries and is a stickler for proper form and recovering right. Don’t let his talk scare you…it’s all out of love. Plus, you’ll be thanking him for it at Mile 20! 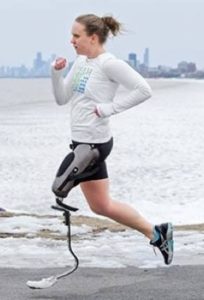 Hailey is passionate about helping others achieve their fitness goals and introducing them to the multisport lifestyle. As a former One Step camper, counselor, and staff member, she is equally passionate about the mission of One Step, and has a deep understanding of the life-changing power of its programs. Hailey is excited to share both of these passions with the members of Team One Step.

Hailey is a runner and world class triathlete who has been racing for the last six years. She ran her first marathon for Team One Step in 2013; the following year, she broke the marathon world record for above-knee amputees. Though she loves the marathon distance, Hailey’s primary focus is short course triathlon. She has competed internationally on the Elite Paratriathlon circuit since 2012, including winning the Paratriathlon World Championship in 2013. She is currently a member of the US National Team and earned the silver medal at the 2016 Paralympics in Rio de Janeiro!